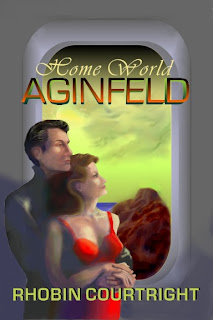 Betrayed by family and friends, thief Alix Risseu stands condemned on Aginfeld, a plant under the effects of a thousand years of bio-forming, a feudal but technologically advanced society boycotted by civilized planets for hundreds of years. Only two men can save her from execution, and both are her enemies.

Home will never be the same again, at least for Alix Risseu who is used to having free reign on Celeste Station where she runs a very profitable music company. Alix finds herself abducted on her walk home by the Enforcers of the blacklisted colony planet Aginfeld to find out that's she wanted for theft and tarnishing Aginfeld pride over their history. The only problem is she didn't do it, but wasn't about to admit that if it gets her credit for proving Aginfeld weaker in system security than they claim.

Nikal "Bull" McDirk, Commander of the Aginfeld Enforcers, is smarting from one too many blows. Not only is he publicly censured for the theft of one of the habitats' seals, but his personal enemies are lining up. With having to track down the known thief, Alix, he finds another notch is one of his top enemies Zach Rosly. In one swift movement, he plans on righting some of what went wrong by saving Alix from her punishment of execution by claiming her as wife. Not only does that stop his Lord's plans to marry Nikal to someone, but it stops Zach from wedding Alix and making her pay for humiliation when they went to school together back on Earth.

Simple revenge takes a whole new turn when the balance in Aginfeld is unstable. With a new vote coming up to rejoin the Colonial Pact that ruined them before or to join Earth National, things start taking a turn for the worse for Nikal and Alix. Betrayal runs through the Lords of other habitats, the Colonial Pact, and even some of Nikal's most trusted Enforcers.

An unexpected turn frees Aginfeld from it's past barbarian-like ways as Alix and her twin sisters come to the planet and start to reshape their views. Now fertile woman are working, Earth National is helping to bring more trade to the colony, and Alix proves that despite most of the population being sterile, life can thrive on the once blacklisted colony. Rhobin takes you on a very enjoyable space trip all over the galaxy in her novel HOME WORLD: AGINFELD. With trips between space stations and planets, you'll find yourself mixed in with the politics and life that make up Rhobin's universe. Being a science fiction fan, I can say this is another twist to what space living can be and won't be found anywhere else. 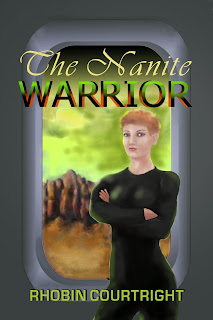 After a thousand years of bioforming, turmoil and danger define the planet Aginfeld, but nothing has prepared its citizens for an attack by a centuries old Dragoon soldier, or another attempt by the Colonial Pact to claim ownership of Aginfeld.

Enforcer Commandant Ithan Van Garth doesn't want another wife selected for him by anyone. He will claim his own no matter what the consequences. Dragoon pilot Xandra doesn't want to die, but she doesn't want to kill thousands of civilians for the greedy Colonial Pact directors. They leave her no choice.

Commandant of the Enforcers, Ithan Van Garth has captured what looks like a Colonial Pact spy, but for Ithan it is a lucky encounter. Rather than agree to a wife of his lord's choice, he can choose his own. Not letting his former superior, Nickal McDirk claim the prerogative of telling his new wife her status during the heat of interrogations, Ithan spoke. "I claimed you to wife, Xandra, on the flight back to Abode."

Her reaction wasn't what either man expected. She laughed, weak, spindly, but a laugh. "Bad luck just won't end, but this time, I'm sure yours is worse than mine, husband."

Excerpt from The Nanite Warrior

As the heli settled on Enforcer Precinct’s landing deck, Ithan heard the massive overhead doors moving into place to seal the port. Ithan rose and snapped his fingers. Leid followed at his left heel, and he followed a few steps behind the stretcher carrying his new prisoner-wife. Randall walked on his right side.

He knew he should feel far more upset with his idiotic action. His claiming, certainly in his own mind, ranked as the most outrageous and strangest departure from Agin’er behavior ever, and he could guess what Lord Van Garth would think. After all, while McDirk had claimed his valuable prize before she was beheaded for crimes against Aginfeld, he already knew exactly who she was. Ithan knew there would certainly be repercussions over his claiming, especially since his wife was obviously on the Colonial Pact payroll. Yet, somehow, his decision made him feel more in control of his own life, even made him feel adventurous. And certainly he had thwarted Lord Van Garth’s plan. No potential wife would marry him now.

The Enforcers’ medical team, led by Doctor Branduff Tik-Slade, tall and blonde with his habitat’s heritage, already waited on the landing deck as he emerged from the ship. Tik-Slade’s presence caused Ithan some dismay.

Aginfeld’s Sovereign Comyn Tik-Slade was the doctor’s cousin, and the sovereign would surely learn of what had transpired quicker than Ithan could make any report.

Doctor Tik-Slade glanced at him, taking a second from his examination of his new patient. “Thank God, the message said it was you we would be treating.”

“Don’t know how that miscommunication happened.” He smiled as the doctor’s face relaxed. They had worked together for years in the Enforcers, and had become friends due mostly to Ithan’s medical background.

“Take care. You handle his wife, newly claimed,” Randall spit out in gruff disgruntlement. “Must be the position…making too many decisions disturbs the mind and causes even clever men to make rotten personal choices.”

Ithan threw his bodyguard an expression that ordered him to desist, since the doctor had done something very similar. Randall huffed and fell into position.

“She is off-world. Her flight crashed, and she halo-jumped to escape.”

Tik-Slade gave him a protracted look before he turned his gaze to the medical reader on the woman’s neck. His medical team transferred her naked body to the waiting treatment carrier. More than one took a second glance at the firm musculature of her long frame. Beneath her life support garment, they had found another wound, a short but deep slicing wound that left dried blood on the inner support garment, and a small tag pulled from the muscle, hanging outside the body from the wound, wires still connected it to the body. “Don’t touch that,” Tik-Slade ordered his team. He read his medical reader. “Close the medical carrier and increase the pressure, let’s get her to the infirmary,” Tik-Slade told his team while he finished connecting various tubes and equipment. Within two minutes the three medical personal were rushing the carrier to the infirmary in the Enforcer Precinct.

Before following the medical team, Ithan spoke to the officers awaiting his orders. “Take the flight and life support suits to discovery, explain the situation, and tell them to see what info can be learned. Tell tech to track that ID tag, and as soon as the weather clears, send out another flight to inspect the crash site. Have the crew collect the debris and take it to the science lab. They might be able to tell us something, even if it’s only flight data information. Make sure there are no transponder devices left.”

He looked around the deck. His men worked storing equipment while cleaning, and securing the just-landed heli. Already the landing circle slowly rotated, moving the heli to the correct position to be moved into line with the other atmospheric craft parked in a semi-circle around the landing deck’s perimeter. The hum of equipment, voices, and the distinctive scent of the bio-fuel lingered in the air.

His wife waited. The thought drew his attention and he left the landing deck. 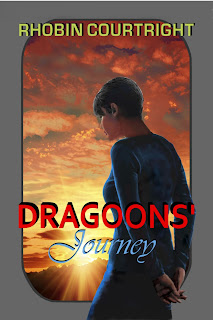 Part of a trio of Dragoon super soldiers who have escaped Colonial Pact ownership, Brigit has moved constantly for the last twelve years. The three use their highly developed skills to protect each other and remain invisible to any Colonial Pact hunters.

A message from a trusted source brings them to Aginfeld, a planet whose bioformed land and atmosphere nears completion. Inside their ancient habitats, the residents are known for the feudal lifestyles. They have survived the Colonial Pact’s decimating exile, are now a legal colony again, but under a subversive attack. The corporation wants Aginfeld at any cost for its vast and valuable resources and its soon to be habitable land. Brigit knows Aginfeld is a dangerous place for Dragoons, but the lure of freedom and a home is irresistible.

At eighteen, Meara would do anything to escape the abuse she endured in Falcon House on her home world of Reax. An Engagement assignment off world given to prove herself a capable Falcon ensured her escape. She only stayed long enough to make sure her one best friend made it back to Reax.

Nine years later war and plague have decimated Reax. When proof is discovered of a renegade Falcon, Jencet is sent to bring her back to Reax. It might be difficult as Maera is now a citizen and war hero of the powerful United Planets Alliance, a government powerful enough to take-over Reax.