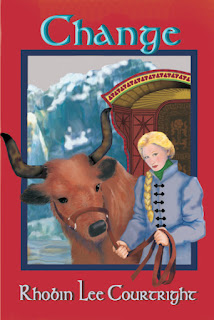 Fantasy with romance elements, now available Wings ePress
This is a sequel to the Magic Aegis world and a prequel to Acceptance although written out of order.

Tyna is Kissre's sister. Where Acceptance gave Kissre's story, Change is Tyna's. After her mother's death Tyna, who has always been warned not to expose her special mental gifts, finds the temptation to take her trader's caravan into Cygna irresistible. Once there she finds she won't be permitted to leave.

The flaming brand heavy in her hand, Tyna took two steps and thrust the short length of wood into the carefully built structure. Dry kindling quickly ignited. Like a replay of the life it consumed, the fire remained hesitant at first. Small nascent flames crawled in pale transparent lines along pine branches to crackle suddenly with the energy of young life. Air caught and twined the glowing currents in endless possibilities and eddies that eventually whipped into a crescendo of radiance, engulfing the pyre. She imagined she saw her mother writhing within, as she had before the fever claimed her. The image was so strong she nearly called out.
“Your mama is now at rest.” The cleric patted her arm and left.
At rest? Mama never rested. She caught herself up, hearing Naomi’s curt reply to calling her 'Mama'. “I am Naomi, owner of a caravan and mother of two girls, but still myself. You will call me Naomi.” Her words backed her strong Kernite belief that the Holy One was everyone’s parent; his followers were all brothers and sisters, meant to work together but maintain independence. Tyna murmured an answer to her memory. “I am sorry, Naomi, but you will always be my Mama.”