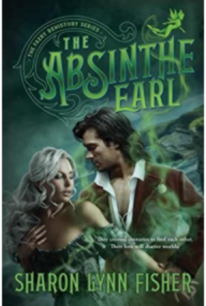 English scholar Ada Quicksilver is studying the effects of absinthe on the possibility of fairy sightings. She is visiting Ireland to learn more and to discover evidence, if possible. One evening a few days before Christmas, she enters the Green Fairy absinthe house in Dublin to further her research on her thesis of “Anthropologic Explanations for the Exodus of the Daoine Maithe,” or ‘gentlefolk’ as Irish refer to fairies. Recent articles in several well-respected newspapers claim a connection between imbibing the green-colored alcoholic beverage absinthe and the ability to see fairies. She is looking for people who know of fairy stories, or those who have had firsthand experience with fairies. A slightly scruffy-looking man wearing green-tinted spectacles approaches and offers her a glass of absinthe. He explains it is a bribe in exchange for his claiming the unused chair at her table. His clothes are soaked from his ride from the harbor, and he wishes to warm up and dry out before the fire. He introduces himself as Mr. Donoghue. They start a conversation. He soon explains he thought her older. A not uncommon comment as her premature silver-colored hair makes this a frequent misconception. A waiter approaches and places a glass on the table apologizing to Lord Meath for the delay. It surprises her, but their conversation continues. Soon she is explaining a single, respectable woman’s purpose in visiting such a place.

Edward Donoghue, Earl of Meath, is intrigued with Miss Quicksilver’s observations. He suffers from sleepwalking and has encounters with fay he cannot explain. Absinthe helps stop his night wanderings which allows him to sleep, and the green-tinted spectacles limit some of the odd beings he sees. He thought he was losing his mind, as did others who know him. Now he wants to learn the truth. Even in this place, though, a banshee appears and curls around Miss Quicksilver, warning him of her imminent death. Besides his strong attraction, he wants to protect this young woman. He can use Queen Isolde of Ireland’s demand to do so. Besides being queen, Isolde is his cousin. She has asked him to inspect the site of the ancient fairy mound Bru na Boinne. Then too, Miss Quicksilver’s curiosity and knowledge might help not only him personally but also in fulfilling the Queen’s request.

In THE ABSINTHE EARL, author Sharon Lynn Fisher creates a fantasy world steeped in actual Irish history and mythology. One of Edward’s ancestors is Diarmnid (Deer-mid), a legendary warrior of the Tuatha De Danaan, an ancient supernatural people of Ireland. His love for Cliona made Diarmnid use a seal to force the immortal out of human Ireland; however, the seal is weakening. Diarmnid takes control of Edward’s body at night. Ada has an ancestral link to Cliona. Cliona was a mortal who became the immortal queen of the banshees in death. Cliona speaks within Ada’s mind and sometimes takes over her body. Both Edward and Ada feel their attraction to each other, but is it really an attraction between their human selves or that between Diarmnid and Cliona? To help save Ireland they must travel a dark and dangerous trail through the alternate world of Faery. Can they reclaim their minds and bodies after these ancient ancestors have invaded them? The story is full of romance and danger with faery-enhanced situations. The author uses lyrical description to great effect, which enhances the tale’s supernatural landscape and seems to imbue the story in Irish feeling. The story creates a fascinating mixture of the historical and fantasy genres.
at 4:14 PM No comments:

This month's topic is about plots and how they are developed: from personal experience, imagination, or research? For me, as I believe it is for most authors, it is a combination of all three with maybe more stress on one than the others during particular scenes.

In my case, the plot for a story develops from imagination, but this is often based on research supporting different aspects of the setting—especially with science fiction and fantasy features of most of my stories. I do use personal experiences, although a lot of them come from interactions with others and I use my knowledge of their tribulations or achievements to add drama to a story.

Most often I hope my plot is tightly bonded to the setting, as setting often influences the story's progression. I base my science fiction on imaginative settings developed from some knowledge of science combined with some fanciful ideas about where known science and society might take humans. For one of my science fiction novels, I had to research the possibility of bio-forming a planet, how it could possibly be done and how long it might take. Because of scientific speculation, many have the idea that humanity will eventually move to distant off-world places. This was also the case with developing super soldiers for two stories. It turned out these soldiers were too dangerous to keep but too valuable to destroy, so they ended in cryogenic containers as property rather than people.

On the other hand, the often dual part of the scifi/fantasy genre, fantasy, is often based on a historical settings, which also takes research.

I’ve written contemporary stories, and some might think them easier to write, but contemporary society is fast-moving and under constant change. Remember how Jane Austin wrote a contemporary romance that evolved into historical romance? While the purpose behind the plot may be easier to develop, realism comes from investigating locations, weather, travel, housing, and fashion. Plus police departments operate differently from location to location. In the United States, every county of every state has its own local laws. These cannot contravene state or national laws, but they can affect a plot.

The important part of the plot is the story's purpose, the difficulties in reaching it, and the ultimate outcome. Reactions between characters produce the drama and impulsion contained within the plot, which is where personal experiences often become important.

A plot with a strong purpose, an accurate or at least believable setting, and realistic characters all work together to create a good story and are all dependent on my willingness to research, and then use my imagination and experience.


I love reading, love both fictional and non-fictional stories, love finding information, but along the way I've found some reading excruciating to understand. If you've ever tried to read the 'read this' agreement on all types of Internet usages, you know what I mean. Mix legalese terminologies into any text and you have loads of readers who just won't.

Terminology and how it is used is one of the biggest problems in text readability. With thousands of words, some remain unknown to most readers. Do you know what the words thole, opusculum, moiety, or fantod mean? They have all been Merriam Webster Word of the Day words. I must admit I was not familiar with these words' meanings. Unfamiliar words make reading hard. If it slows my reading, it might make me close the book.

Like law, every business has terminology associated with the business. If you are in the business, you have no trouble reading articles or magazines devoted to that business. Those unfamiliar will have to thole through the reading.

Have I used unusual terminology in my stories? Yes. Usually, I follow with a short phrase of definition, but in science fiction, I've occasionally made-up words. In those instances, I try to make it clear what the word means by how it is used.

How sentences and paragraphs are organized is also important to easy reading. Paragraphs lasting a page or more or very long sentences can diminish a reader's interest in reading.

The time frame of the author and when they wrote their story or essay also affects readability. Writings from long ago put sentences together differently, slowing down and confusing the modern reader. Constant use of passive sentences and old-fashioned phraseology makes reading difficult and often bore readers (a major sin for an author).

Okay, so poor grammar and mechanics makes reading difficult, too. Misused homonyms, misplaced modifiers, and overuse of particular words affect readers, but this is why repeated editing is so important.
at 12:00 AM No comments: