Cows, Milk and the Changing Farm 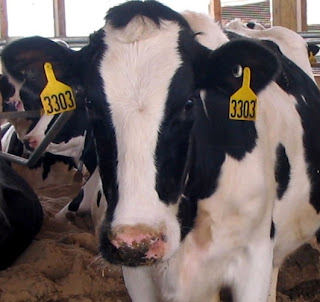 Standing her ground, one curious cow stares at me, ready to bolt if necessary.

I've always loved the black and white hides of Holstein cows. A few weeks ago I had the interesting adventure of visiting Brad and Lori Gernaat's dairy farm in Marion, Michigan, with my son and his family. What a surprise!

Somehow I have missed the change from seeing dairy cows in fields to their disappearance from farm pastures. They now remain in large barns where they seem perfectly content to munch on the silage they're provided and wander around the aisles of their domicile. The land they used to graze raises the silage the cows are fed, the liquid refuse from cleaning their barns fertilizes the fields. 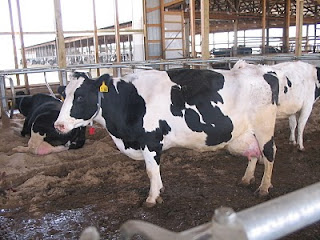 The Gernaat's barns are open so their 1500 cows always have fresh air, but they also have curtains that can be pulled down in winter to prevent the worst of the cold entering the barn.

The cows are milked three times a day. I watched them at one milking. One cow gave twenty gallons of milk. If she gave the same amount at every milking, that's sixty gallons of milk a day! Wow. 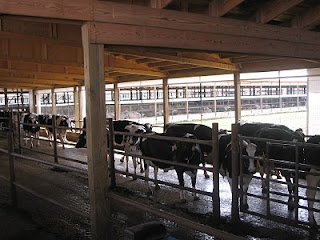 Off to be milked, the cows follow each other out of one barn and down the track that leads to the milking barn. Of course, being the curious creatures that they are, they had to stop and look at the visitors. Once in the milking barn, they turn their rears to the machine. Two men work cleaning utters and attaching milking tubes. A few minutes later, the machines release and the job is done. The cows have to wait until every cow is finished being milked, then the gates open and they walk back to their barn. Creatures of habit, they seem very content with their lives.

I felt bad for the calves which are pulled from their mamas soon after birth, but it is a safety issue, and soon enough they are growing up with a group of friends.
at 4:00 PM No comments:

Email ThisBlogThis!Share to TwitterShare to FacebookShare to Pinterest
Labels: my world, technology 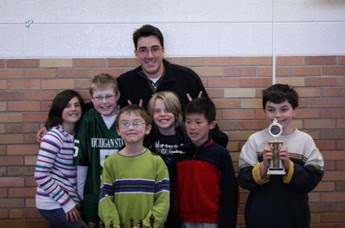 My son, Chris, and his chess club. I think volunteerism is important to every community, and I'm very proud Chris volunteers to teach elementary students Chess. You can see this group is very happy. They had a very good showing at a tournament in Ludington recently.

He is still a kid at heart. I can tell because I think those are his fingers behind those two boys' heads. Hmm... they never outgrow teasing, do they? But, doggone, I think he's a pretty great kid, even if I do say so myself. I play chess, too. Everyone loves to play me because they always win.
at 9:22 PM No comments:

Email ThisBlogThis!Share to TwitterShare to FacebookShare to Pinterest
Labels: family, my world, volunterism

Amanda Blanchard has lost all confidence in her own good judgment. The man she married, who had been so supporting and loving at first, turned out to be a greedy, manipulative user. Not wanting to share her with the child she adopted, he divorced her, taking a big chunk of her inheritance.

Now Wade Preston, her “heart-throb” in high school is back and his development company is threatening to take even more of her inheritance away from her. At least that is the way it seems.

Wade Preston, a well-educated, self-made man, heads up a successful business, but realized he has allowed a partner and his brother too much leeway in running the project at Manistee. They have created serious problems. With business problems to sort out and an ex-fiancé that refuses to accept the “ex” part, Preston sets out to make things right, but ends upshot, unconscious, and covered with snow in Amanda’s orchard.

The events, mystery, and suspense that surround Amanda’s Stone House after she drags the unconscious Wade into her kitchen keep the reader on pins and needles. Her efforts to keep everybody and everything safe during the isolating snowstorm reveals much about Amanda’s true self. The amount of energy she expends is amazing. She is a spunky lady even in the face of some heartbreaking events.

Rhobin L. Courtright creates characters and a setting that pulls the reader into the situation where things look dire for Amanda until her modern knight in shining armor comes to the rescue. Stone House Farm is crammed full of characters to love, to hate, or even to wish for as friends. But, best of all is the love that grows amid all the turmoil. GOOD READING!
at 7:03 PM No comments:

Email ThisBlogThis!Share to TwitterShare to FacebookShare to Pinterest
Labels: Protecting Her Own, reviews, Stone House Farm

UPDATE: Title is now Protecting Her Own
Excerpt from Stone House Farm, a romantic suspense novel from Champagne Books April 1!

She walked the fence-lined track between two orchards that led to the pasture on the back acreage. Amanda stopped every few minutes and checked the way, trying to locate Noona. No hoof tracks marred the pristine whiteness, but at the end of the path, Amanda saw the gate had blown shut.

Noona stood, head over the top rail, nickering welcome. Amanda walked up and placed a lead line on the mare’s halter before opening the gate. Sides bulging with her pregnancy, Noona didn’t look distressed or about to go into labor. The mare wore a blanket and Amanda checked the straps.

“Naughty girl!” she said softly starting to lead the mare back to the barn. She stopped, realizing Buck wasn’t with her. “Buck! Here, Buck. Come, Buck!” When only silence answered her, she called and heard a faint bark. Repeated calls brought more barking, but no Buck. “You see where your truancy got us?” Amanda asked the mare. “He’s probably caught his collar on some shrub.” She tied the lead to the fence, then climbed over the slippery rails into the northern orchard to find what had distracted Buck.

By concentrating on the direction of the now constant barking, she searched. When he fell silent, she would call and the barking would resume. The orchard looked unfamiliar in darkness and falling snow, with tree limbs appearing to loom out of nowhere, and the ground strangely transformed. With frequent calls, answered by Buck’s barks, she homed in on the dog. He looked like a dancing shadow in the surrounding whiteness.

Buck wasn’t trapped by his collar. An unusual long mound of snow lay under one of the apple trees. The dog
barked and dug around the shape. Approaching with caution, Amanda swept her flashlight’s beam over the mound and caught a flash of khaki and fingers. The mound was human. She hurried her steps. Kneeling down she rolled the camouflage-jacketed form over. His face was pale and drawn, his black hair ice-coated, dark, wet strands plastered his forehead. Wade Preston!

“What are you doing out here? Visualizing where to put your condominiums and golf course?” She asked the
unconscious face. He had to have walked here. She noticed shallow snow footprint impressions in the snow. Why come now, during a snowstorm?

“This makes as much sense as anything has lately,” she complained to Buck.

Buck whined, his tail striking her back as he stuck his head under her arm and snuffled the coat of the prone man. She pushed Buck away. “Good-boy, yes, you found him, down.”

She pulled off her glove and felt his face. Wade was cold, too cold, his lips blue, his skin deathly pale.

“Please, God, don’t let him be dead,” she whispered, feeling his throat for a pulse. She found a beat and sighed in relief. Taking off her jacket she threw it over him. Jumping up, she ran to Noona, climbed the fence and slid onto Noona’s back before untying the lead.

It was dangerous, but she pushed Noona into a gallop back to the barn. Once there, Amanda jumped off the mare and led her into her stall and latched it. She grabbed the slick piece of plastic that Kari used as a sled and some old horse blankets, then ran back the way she had ridden. Several times her feet slipped forcing her to catch her balance and slowing her progress as she tried to run through the rapidly accumulating snow. She arrived out of breath. Falling to her knees, she pushed and pulled him onto the sled, calling, “Wade, wake up. Wade!”

Wade’s eyelids flickered, but he didn’t respond. Amanda continued shouting, unable to stop though she
doubted he heard as she pulled his body. His eyelids fluttered and then opened. He raised his head and his gaze locked on her.

“You!” His soft, hoarse outcry cost him, his head fell back in a helpless fashion and his eyes closed to mere slits. He gasped as she pushed him further on the sled, his face grimacing, his eyelids scrunched shut. “Why not me? You’re trespassing on my property.” Wade’s words came thick and slow. “Is that why you shot me?”
at 7:42 PM No comments: