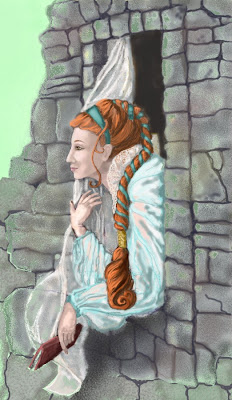 One of my favorite characters from my first book, Magic Aegis, is Ottilie.  One of the secondary plotlines concerned her and her hero's journey, so she was important to the story even as a secondary character. Hope you enjoy her excerpt. Magic Aegis won that year's Dream Realm Award for a fantasy novel.

~*~
Cold infiltrated the austere interior of Queen’s Library at Queen’s University. Unthinking of her surroundings and unrepentant, she muttered a few words recently learned from her father’s new under-groom after her horse not only bit the lad but also stepped on his foot. Perhaps the gentle clerics held a desire to keep more earth-bound types at bay, she mused, as the drafts cut through any normal mortal’s clothing with absurd ease. Carefully she adjusted the folds of her floor-length brocade surgown for the hundredth time.

Looking between the stacks of books on her table she found one cleric still watched her with benign aversion. With measured movements she pulled the cuffs of her foresleeves down over her hands, covering her cold, stiff fingers. It helped little, other than to look pretty.

She admired her clothing with pleasure. The backsides of her cuffs were quilted in an apple green silk that matched the embroidered silk leaves adorning the gold stems that swirled up the sleeves. Pearls formed petals around topaz-centered flowers in a precise geometric pattern. The sleeves were tied with gold ribbons to her brown velvet surgown with puffs of a fine linen chemise showing through the ties. The edge of the gown also hung heavy with gemstones, pearls, and peridot, and on this cloth, orange and amber silk embroidery embellished the whole. All in all, she knew, with the peridot winking from the fillet encasing her red hair, she presented an extraordinary visage in the somber, book-lined gallery. If they insisted she wear what they considered proper ‘women’s wear’ to enter their sanctified grounds, then she would dress to scream ‘Aristo Woman’ back.

Obviously, the misogynic clerics had missed their mark. A bastard, true, but a rich one capable of facing down the haughtiest Aristo in court. These clerics offered little challenge; especially at an institution where money spoke, if not more clearly than the Holy One’s word, certainly louder.

She held a history of Kennetsure, but had found little about the Aegis. Once expelled from court, history ignored them, but land records might trace ownership. Except the Vere family became enmeshed within clan territory, so the family could not be identified. The families that had owned the ‘Aegis’ land in Wessure and Easure were gone, dead and forgotten.

Only the lands remained, and those had reverted to the crown. Those on the western ocean coast in Wessure remained in crown hands. In Easure, Ottillie learned, Aristo Yonger had claimed the land by direct heir forfeiture. His claim on one of his distaff relatives from the Guthase family went uncontested and he took the land from the crown.

Ottillie sighed to quell a thrill of anticipation that tickled just beneath her heart. Egan. One would think a supposed living talisman easier to track down as either fact or fiction.

She turned her focus to her father’s problem. His men, the Kennetsurean brothers Corbin and Galen Napier had unearthed no further clues. Questioning guards and prisoners took time. No one remembered seeing anyone spend many candlemarks in the library other than herself, who nearly dwelled here. Neither of the Kennetsurean men knew anything about the existence of the Kennetsurean Aegis, which caused Ottillie some doubt of the pair.

Egan, like a litany, it ran through her mind, disrupting concentration. The answers might be there. True, the Aegis powers might be a myth, but the library at Egan was reputed the greatest in all Kaereya, perhaps the best in all the remaining world. Ottillie wanted to know all the past, even the forbidden secrets of before the Cataclysmic Centuries, to learn the truth of the Protector.

She rose to roam the stacks once more, smiling at the cleric. At long last, she’d found books of interest and returned to her seat to read well into the afternoon. When no lamp was offered as the room’s light faded, she rose and picked up the books.

“No books allowed out of the library,” the cleric said as she passed his desk.

“I am on the King’s business.”

“You have papers for this business?”

“Do you ask all the courtiers for the King’s papers?”

“Send to the Bishop. He will give approval.”

“The Bishop is conducting high service and cannot be disturbed. You must leave the books here until he can be reached.”

How convenient. “I will return tomorrow.” Ottillie said in the genteel voice her governess had ground into her comportment with the delicacy of a millstone. “Please hold the books until I return.” She smiled a brittle non-smile and nodded with no response from the cleric. Once she placed the books on the desk, the cleric returned to his studies, ignoring her as she walked away.

She strolled in sedate steps from the library and headed toward her own apartment one floor below her father’s rooms, a quarter mark away. Halfway there, Theodulf Gilchrist, Duke of Hearthron, stopped her. Tall, black haired, handsome and exquisite, Aristo Gilchrist, as King Frederick’s brother-in-law, exerted a powerful influence within the court. His courtier toads and hired men trailed him.

He demanded the fullest respect, for even with the death of his royal wife, his two sons, blood princes Emory and Tate, insured his position at court and the royal family held him in high regard. His expression mocked his gracious greeting, as did the smirks on his men.

Ottillie assumed her ingrained poise, and gave the curtsey Gilchrist’s position demanded. His lazy eyes sharpened as she raised her head. He took her hand and raised it to his lips as he pulled her from her sunken position. “You look, as always, brilliantly attractive, Ottillie.” One of his retainers coughed to cover his snigger, and with disciplined aplomb Ottillie ignored it. The duke lowered her hand but kept it in his grasp, his thumb running over its smooth skin, it finally came to rest over the darker circle of skin as if to hide the blemish.

“Thank you, Duke Hearthron. Your well-known discernment in matters of beauty and fashion does me credit.”

“Not at all. Perhaps if all... daughters... at court were as attractive, the court would be a far more elegant place.”

Ottillie missed no nuance, but gave him her best simpering smile, and thanked him.

“Will I see you at Handfasting?” he asked.

Keeping her thoughts tightly guarded, Ottillie answered. “No, I’m beyond that now. Hopefully I will be traveling.”

“Traveling? This close to winter? The Earl of Rikon has given his permission?”

“And where will your southern travels take you?”

“To the Zankiri coast. I am tired of the drafts in the Queen’s Library and wish to spend the winter reading in warmth.”

“Zankiri?” Gilchrist laughed. “Ottillie! You needn’t go so far to stay warm. If you were in my care, you wouldn’t spend so much time among the books and dust. There is more to life, you know.”

Ottillie gave a silvery laugh. “I know that as well, Duke Hearthron.” She gave him a sly look. “But I must confess I find myself lucky to remain in my father’s care. I am thus assured of everything I want.” With a subtle tug she pulled her hand free.

“What, no desire to be a wife? That sounds premeditated, Ottillie, and I congratulate you on your machinations if they bring you all you desire. Just remember there is surely one other man who wishes to give you everything a woman could desire.”

“The trick is finding him,” Ottillie laughed. “I must not keep you any longer Duke Hearthron.” She sank into another deep curtsy. “You are dressed for riding and I would not wish to keep you from your horses. I know how you men are about such matters.” She stepped back, allowing the duke and his retinue to pass. She kept the smile pasted to her face as she watched them walk down the hall. Turning, she made her way back to her room, all emotion firmly bridled.

~ * ~
The Duke of Hearthron stopped and turned to watch Aristo Rikon’s daughter depart. Her gown swayed with her elegant movements. One of his companions made a humorous, foul remark about the lady. Others laughed.

“You are all very short-sighted,” he said with a smile. “Lady Ottillie is the only child of the land rich, powerful and wealthy Earl of Rikon. A prize that overcomes the few flaws his daughter possesses.”

“If you can put up with the mouth.”

“Do you have plans for the lady?”

“I always have plans.” Hearthron’s smile deepened. Only he knew how much he planned.
at 5:10 PM 1 comment: