Excerpt from Legend's Cipher, an anthology 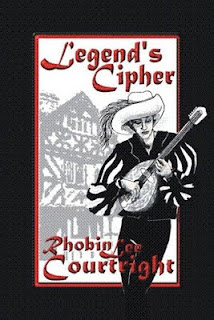 Bertok sat across the table from three examiners, his hands clasped on the table in front of him, and wondered why he had been summoned to Vincenne University on Acolyte Island, the home of the head bishop of the Holy One’s church. Three clerics silently stared at him from the other side of the table. One chair remained empty.

This couldn’t be about any immoral activity, could it? Yes, they could find the cause, but my carousing has never led to another’s harm, has it? Is this a tribunal? The thought of burning briefly terrified him, causing him to quickly regard the other men seated in the room. No, those types of illegal inquisitions stopped generations ago, didn’t they? Besides, he knew no secrets, and he tried whenever possible to avoid such awareness.

Bertok compressed his shoulders while he twisted his neck, cracking the bones to relieve his tension. What had he done? A complaint sent to the Bards’ Guild at Queen’s University could result in expulsion from the guild. That notion shook him. He had a dual calling as both storyteller and musician. What would he do? He loved being a bard; the work suited his wanderlust and his talents. He didn’t want to labor in fields or be beholden to some shopkeeper, or worse, some aristo.

A few inescapable reflections exposed situations where his actions had been less than ethical. These situations arose mostly through mischance or miscalculation. He was not as pure in body and soul as the priests demanded, but surely none of his misdeeds rose to punishable offenses? His only other secret he kept twisted tightly shut. How could they possibly know of that?

His short, well-worn leather jack felt buttoned too tight even if only at the waist, and to unbutton it would be far too casual for whoever was coming to talk to him. Besides, the jack hid stains on his shirt he did not wish to expose, even if the shirt’s frayed cuffs escaped the end of his jack’s sleeves.

Unlike many bards, I claim no coat string relation to any aristo, and I look like what I am, a powerless itinerant bard—someone with no influence. Perhaps even a worthless sacrifice for some religious goal? He shivered.

The closely woven texture and slight sheen on the three examiners’ gray robes of common clerical service, while plain, displayed fine quality. Their cowls, arranged in careful folds around the clerks’ necks, probably kept the chill-laden air drafts away while Bertok’s knees knocked with nervousness and the winter drafts chilling the room. The fireplace’s burnt offerings failed to warm the room to more than bearable cold.

His mind returned to his ponderings. Why was I called to the Bishop’s School? He had graduated from Queen’s College, so if he was to be disciplined for any incorrect language or behavior, would not the oral rhetoric professors of his own school handle the matter? Not the prelate’s teaching center? Did they know his secret? With applied effort, he prevented himself from unseemly squirming in his seat, but the clasp of his hands grew tighter.

The leaded panes of the tall, arched windows let drab winter light filter into the paneled chamber and made the ancient walnut paneling appear all the darker. He wondered if the prelates preferred such somber surroundings. The click of the latch of the door drew his attention.

His eyes widened, and his mouth dried as His Eminence the Bishop entered. If he didn’t know the man’s face, he’d have never recognized him. The bishop also wore general clerk’s dress rather than the ornately rich robes of his office. Bishop Hedrick settled his ascetic’s frame in the empty chair across the table. His gaze settled on Bertok. His eyes were the most innocent blue Bertok had ever seen. The bishop smiled, gentleness lining his face.

“Bard Bertok, it was kind of you to travel so far at my request.”

Bertok hesitated, wondering what to reply, but took the safe route. “Your holiness, I am at your service, only curious as to the reason for your request.”

The bishop’s smile changed his austere expression to one of an ordinary man. “That certainly eases my conscience. Before I embark on my reason for calling you hence, I would like to ask you a few questions.”

Bertok nodded his agreement while his stomach boiled in tension.
at 12:55 PM No comments: