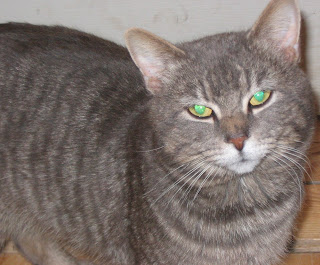 I started laughing. Opportunists? Cats? I definitely believe cats chose to live among humans. To say we have domesticated cats is a mistaken notion. The truth is: cats domesticated us. They find us very useful. Good owners provide their cat owner's every need. While they are often neutered by their 'owner,' enough humans do nothing about their cats' sexuality, providing ample means to keep the species going. Yes, cats usually ignore orders of any type. They only hunt creatures humans consider vermin at their own leisure. Who else works just for a few contented purrs from their cat? And yes, there are not perhaps as many good 'owners' as cats might wish, but enough to keep millions of cats happy. The rest keep hunting.
at 12:35 PM 1 comment: