Crewkin: A rogue engine and a dead crew.


A green light blinked on the main command panel. Zak swore. They twisted to look. Realizing the previously dead panel responded, they strapped themselves into the pilots' chairs. Kin training
returned as guilt assailed her in a litany, dereliction…dereliction…dereliction.

“Shit. The damn thing has control of flight command. Suit up.” Zak pushed more pads with no result.

“How?” Dizziness assailed her. When she didn’t move, Zak pushed her clothes and suit into her hands. It was difficult to keep her balance. Only then did she notice gravity held her. She began to dress. “Something is happening. One of us should stay here.”

“No. None of the panels respond, our code is locked out. We’ll go back to the fore compartment, and access the escape pods if necessary.”

When she hesitated, he grabbed her chin and pulled her to face him. “Get into your suit, now!”

His rigid expression made her reluctantly don her exvee. She heard Zak talking to someone within his helmet. The sound was muted as she hadn’t put her connex on yet. She stared at the message on the board, fear crackling along her nerves. Zak grabbed her helmet and put it on, secured the attachments, and pulled her from the command compartment.

The walk seemed longer, darker, their movements unsteady. Gravity fluctuated with each step, and her feet landed in different places from where she anticipated. Whenever her boots connected with the deck, she felt the beat of the wild engine through the sole. The engine pulse sprinted in a synthesized rhythm of unchecked momentum. Their suit lumes emitted bent and twisted streams of bouncing light in nauseating illumination.

Before reaching the halfway point, a muted voice echoed through Renna’s helmet, …renna markham3…Her heart lurched and her breath caught. A subtle engine whine sounded through the gangway. She recognized the voice. Dom Dukan spoke to her.

They reached the hatch to the forward compartment. She helped Zak manually turn the latch. When the cover opened, Zak hesitated. Renna motioned him to enter, ready to follow. …renna markham3…the familiar masculine voice called her, multiplying into the collected voices of her dead kin. She looked down the corridor. Zak turned from inside the airlock to look at her.

“Ren?” Zak’s voice came through her helmet. She barely recognized his voice. …renna markham3…Sen spoke. Renna faced back down the dark corridor. The gangway blurred and refocused, elongated and returned to normal, moved about as if her eyes looked through a viewfinder. She must be hallucinating. Sen committed suicide. She was dead.

Her friend spoke over Zak’s voice and Renna hesitated. “Do you hear her?”

“Hear who? Hurry! Now!” Zak motioned to her to enter the airlock.

Renna took a step toward the airlock, hesitated while looking down the gangway she had just walked. Operational lights sprang on around the hatch. She heard the hatch mechanism start and turned to the sound. The hatch slammed shut enclosing Zak in the airlock, nearly catching his arm in its closure.

The lock’s click reverberated with noise proving atmosphere present. Lights kicked on in stages along the side partitions and overhead. In the shadows between the shifts in her perception, she saw the faces of her kin. Through her helmet audio, she heard Zak screaming at her. Images of the Markham3’s end overwhelmed her. Now, now was the time, they seemed to say.
# # #
For another excerpt check under heading excerpts
at 9:58 AM No comments:

Sandra Cox is here today to promote her new book Moon Watchers and offer you a chance to enter a contest. Enjoy her exciting excerpt and definitely scope out her contest! Welcome, Sandra. 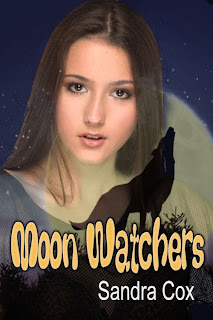 Jolene Sayer, the werewolf hunter, is attracted to the mysterious Braden Knight, which upsets her on several levels. For one thing, she doesn’t have the time to get involved with anyone. In her own words: ‘Being a werewolf hunter leaves little time for estrogen or emotion.’ And then there’s the pesky little problem that she’s not quite sure he’s human….

Excerpt:
As the full moon rose above the leafless black trees, an eerie howl shattered the night. I rubbed the goosebumps on my arms and felt the hair on my neck rise. Moonlight fell in shadowy patches across the living room floor of the cottage I’d inherited on my eighteenth birthday, last week to be exact.

Dad’s in Europe, tracking down a tip he got on a Weres pack. That’s how I’ve come to be alone deep in the forests of Minnesota where there is considerable werewolf activity.

I’ve hunted Weres since I was thirteen, but this is the first time I’ve been completely on my own.

A branched tapped against the window. I jumped then shook my head at my nerves. “Geez.” When my heart settled down, I leaned forward and peered out the window. My hand tightened on the long silver knife at my waist. Nothing moved outside. “Get a grip, Jo.”

I took a deep breath and started toward the kitchen. The tapping came again, this time louder. I whirled. It wasn’t the window, it was the door. Someone or something was on the other side.

My legs stiff, my knees locked, I took one slow step after another. My hand wrapped around the knife and tightened till my knuckles turned white. Who could be out at--I glanced at my watch-- ten at night in an isolated corner of the north. I crept through the living room into the tiny foyer.

I took a deep breath and cleared my mind, the way dad taught me. Nerves left me. The cold logic of the warrior set in. Making sure the chain was in place, I cracked the door, ready to slice anything too close to the opening.

My hand fell to my side. I gaped in astonishment. I removed the latch and stood in the doorway, one hand on the frame, stunned.

“Braden! What are you doing here?” I’d met Braden Knight briefly when I visited my distant cousin Zoe Tempest, vampire hunter extraordinaire. Perhaps you’ve heard of her. If not, I guarantee you will. She’s come to hunting the undead rather late in life--seventeen--but she’s taken to it like a pro, swift, vigilant and tough.

But I’m stalling. I’d felt an attraction for Braden Knight from the first moment I saw his bronzed pecs and thick chestnut hair.

“Zoe told me your dad was in Europe and left you alone in the middle of Nowhere Minnesota. May I come in?”

Damn good question. Zoe had confided her fears to me that the handsome man standing in front of me was of the undead variety. But whether of the pranic--that lives on other people’s energy and aren’t truly undead--or the blood--that survives on warm, red heart fluid--she wasn’t sure.

Zoe’s not even sure he’s a vampire. All she knows is that he has extraordinary powers for a nineteen year old human.

Suddenly, the decision was made for me. Out of the corner of my eye, I saw a huge black wolf rush forward, its lips drawn back in a snarl, its fangs gleaming, its eyes blood red.

Without thought, I jerked Braden inside and slammed the door.

Moon Watchers can be purchased  at Class Act Books in paper or e.

Vampire Island can be purchased at Class Act Books in paper or e.

Vampire Island is also available on Amazon and other e sites.

To celebrate the release of Moon Watchers, I’ll be running a contest from Jan 15 and Feb 2. The winner will be announced Feb 5.  To enter just leave a comment at www.downtownya.blogspot.com and mention Moon Watchers and Tami.

What do you win?

An autographed copy of Moon Watchers

A Starbucks gift certificate to buy your mocha or latte with

And a fun necklace that has a protective cross to safeguard against creatures of the night, a blood drop stone to remind shape-shifters you are protected and a star since our winner will be the star of the contest

Inspiration, a divine spark, stimulus--we all appreciate when that type of enlightenment strikes. The ancients attributed these energies to the Muses, daughters of Zeus, the god who threw lightning bolts of power, and Mnemosyne, the goddess of memory. The Muses were believed to inspire all artists, but especially those who worked with words: poets, musicians, playwrights, and philosophers.More importantly, written words were not subjected to the vagaries of memory. Once recorded, they were always available for anyone who could read. Leaving a written record meant knowledge wasn't as easily lost or changed, allowing the next generation to build on the recorded memories of their fore-bearers. Is that not an inspiration in itself?Before the nineteenth century, written words were not universally taught to the general populace, which made writing a special gift, often a sacred act. Since its inception, writing remained the province of religious brethren. Many scribes could not read, only copy letters. Luckily, during the Dark Ages, they copied many of the Greek's writings, so even today we have some of the Greek stories, poems, plays, and even the musings of their philosophers.The ability to read and write is still not universal, but thankfully, far more widespread today. Today writing is often taken for granted. We have an overabundance of written words, some sacred, some profane, some mundane or inane, and many just entertain. We have so many words in so many places that we often ignore all of them. Those who choose to write words for entertainment, however, often wish they had closer contact with one of the ancient Muses to find their best audience. Where are the muses found? Right inside our heads. Ideas form from mixtures of memory, imagination, and reactions to the world around us, all combined in thought. Sometimes a visit from the Greek god Morpheous helps, too.Outside stimuli include interactions with other people, the excitement of new environments or experiences, or conversely meditating in old and familiar places -- and sometimes the act of moving your body through space and time (otherwise known as exercise) helps us find our muse. As a writer I know the Muses exist. Sometimes they take their time to pull ideas together inside my mind, probably because Terpsichore, the muse of dance, isn't boogieing over the right sequence of neurons. When that happens, I talk a long walk.

In CREWKIN, releasing this February, the heroine Renna must find her own muse, a way of living with herself on the sometimes small, sometimes great stage of life. I hope you will enjoy where my muse led me in this story.Thanks, Lea, for accepting Crewkin to MuseItUp Publishing.

Changing Boxes for the New Year

I've decided to do away with my standard web site rhobinlee.com, which I've had since '03. Instead, I am in the process of moving my site to this blog, with many changes of course, under a new domain name www.rhobinleecourtright.com. This is much easier than maintaining a website, plus I will have more time to write posts rather than play with HTML and CSS code. This led me to think about a fresh start with a new domain name that reflects my entire author's name. Situations are always changing, aren't they? It's like crawling out of a box--new views, new ideas, new challenges. The first one? All my followers and all the blogs I was following have disappeared. Hmm; and I bet it's too late to change my mind. Okay, so this is another dark box I'm slowly feeling my way through. I'll find the light and freedom somehow.

Web presence is important for all businesses, and especially for authors who write electronic media. Once a web page was obligatory, but the net has changed very fast. Time is still valuable, and if something can be done more efficiently, why not change? Isn't that how the New Year is supposed to engage us?
at 12:48 PM No comments: