Where the Story Starts

Most stories start with an ‘Initial Situation’ or a depiction of the main character’s ordinary world, his home. Here the reader learns about the main character, his family situation, and any prophecies or forewarning about this character. This setting indicates the hero’s condition, the world in which they currently live. Valdimir Propp called it the ‘Initial Situation,’ and Joseph Campbell, the ‘Call to Adventure,’ which he says, ‘signifies that destiny has summoned the hero and transferred his spiritual center of gravity from within the pale of his society to a zone unknown.’

The Initial Situation also gives hint to the basic problem, or the main character’s lack, or a lack in his family or community. There may a coincidence or mistake that reveals a hidden secret or something amiss that the hero must be resolved. These mishaps are often an invitation to journey, the chance change -- whether it be to find new love, to solve a murder, to save the world, or to visit an altogether different world. Adventure calls promising change.

With today’s fast-paced society, stories have also sped up. Opening scenes, first paragraphs and first chapters have to have a ‘hook,’ a dilemma or situation that grabs the reader's attention and pulls them into the story. Often this occurs in the character’s common world. In the various CSI television programs, it is the murder as it happens or the discovery of a body and then shortly the main character and his investigation team that serves as the initial situation and call to adventure.

Check it out. Think about TV shows or any book you’re reading. Can you identify the initial situation and the demand for change? It might be in the opening credits, an opening scene lasting a minute or less, it might be a sentence, a paragraph, or a whole chapter.
at 3:33 PM No comments: 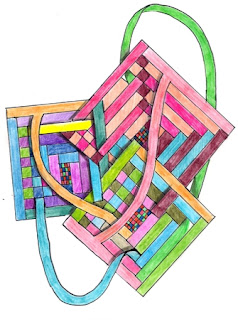 In addition, few of us listen to the stories in the original, oral tradition where ‘once upon a time,’ or ‘a long, long time ago,’ are needed. We chose to read. By making that decision we choose, at least initially, to suspend our disbelief about the impossible and improbable. We give our agreement to visit this story’s world in the now and forever.
at 8:19 PM No comments: For those readers unfamiliar with the phrase 'collective unconscious' it is similar to actions you take that are driven by your personal unconscious but on a deeper level. This is where boogymen, demons, and angels are found, along with many other dream characters. According to Calvin Hall and Vernon Nordby in A Primer of Jungian Psychology, "Man inherits these images from his ancestral past, a past that includes all of his human ancestors as well as his prehuman or animal ancestors."

So authors who consciously create characters based on psychological archetypes found in the collective unconscious use themes universally identifiable, as pointed out in Christopher Vogler's The Writer's Journey, Mythic Structures for Writers. Vogler worked to identify these structures in movies for production companies. The question becomes, can you write a story without using archetypes? Probably not as these phenomena have resided in stories forever and they infiltrate every medium that humans create. Whether you use them to advance your story is another question.
at 10:52 AM No comments:

Reading and the Collective Unconscious

During the last century, several scholars and scientists published studies on mythology, folklore and fairy tales, stories that had started with oral storytellers in man's pre-literacy, early history. They wanted to understand the persistence of these stories. Moreover, they knew certain story motifs were encountered in many unrelated cultures and time epochs.

Their ideas developed from the emerging study of psychology. One of the claims Joseph Campbell made was that these tales were necessary for the development of the human psyche. The researchers found that in a subliminal way, these stories helped the listeners overcome the demons, terrors, and dilemmas haunting their dreams and found in their everyday lives. Further, they thought these stories helped society's members learn the morals and customs of not only their culture but also humanity.

Vladimir Propp, a Russian scholar, studied Russian fairy tales and in 1928 wrote the Morphology of Folk Tales, which was transcribed into English sometime in the 1950s. Essentially, it described a series of plot devices found in every Russian fairy tale. Another eminent scholar, Joseph Campbell, in his The Hero With a Thousand Faces released in 1947, tied a similar story morphology with the archetypes and the 'collective unconscious' of Jungian psychology.

What has this to do with readers (or those watching television dramas, movies, or at a guess, those playing video games, for that matter)? Only that these archetypes and plot devices thread through our own modern stories; at least the one we seem to like best.

As a writer, I find this fascinating. Does that mean if all writers follow these structures every story will be like another? Not at all. Stories that contain these forms, just like snowflakes with only six sides, can enjoy an infinity of difference. A plus side – these story forms are already known to engage the audience.

In upcoming posts I will try to show the popular archetypes and structures found in our media today and how they operate, so come back soon.
at 2:27 PM 1 comment:

Are You Helping to Make A Difference?

If you don't watch NBC nightly news and have missed the Making A Difference segments, you are missing some inspiration from everyday Americans, the type of thing that is going to get us through this financial crisis faster than in the '30s. Go to Making A Difference and see what ordinary, every-day Americans do for strangers. I am a huge believer in random acts of kindness. It balances so much that is bad in life.
at 6:59 PM No comments: