Not sure what to call this fantasy piece. It was written as flash fiction but I've been told it is a vignette, not short or flash fiction. I like it anyway, so thought to share it. Maybe it might make the start to another story.
* * *


A smell of earth, part decay, part life, permeated the air and left a taste on the tongue. Rubble and broken statuary littered the floor. She walked, part substance, part wraith, in a forgotten chamber far below Byblos, most ancient of cities. How had she returned? She could not recall. Someone somewhere must have made an offering in her name.

Once, this ruin had been a dower gift from her brother, her husband, El.

With perfect recall, she heard his youthful voice echo to her through the centuries, ‘Astarte, my star, my heaven.’

He, too, had moved on. He left me to seek more -- sole adulation, the one God.

She threw her head back, refusing to feel tears track her cheeks at her lover’s desertion. She turned away from the thought, her motion following her mind. Fool! That was thousands of years ago.

She held out a hand and an oil lamp formed, its handle between her fingers, its wick emitting flame. As she solidified, her robe dragged through the filth; flickering light caught each slow rising spec of dust. The motes swirled in mesmerizing patterns, each speck forcibly reminding her of long-ago worshipers dancing before her sacred fire. As of old, they danced both separate and together, as in the act of love. She slowly rotated a full circle, visualizing the temple in its former glory. The memory faded. Slow rivulets of reflection dissipating into the dark and shadowy chasm.

The shadows kindled her anger like ash-rimmed black embers. Those living in the sun-drenched city above, building their foundations on their predecessors' dust -- those defilers of her name, honor, and ancient divinity -- they had no idea this sanctuary remained. That SHE existed. 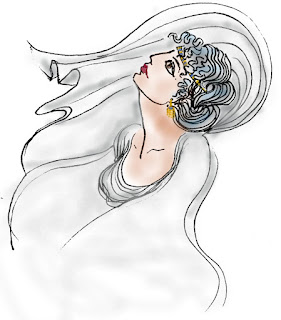 ‘They thought to destroy me, daughter of Gaea, mother to all womanhood. She named me goddess of love and hate, peace and war, barrenness and fertility.’ No one answered her.

A dagger at that betrayal gouged her gut. The pus of uncountable generations of neglect corrupted the wound and her soul. Her fingers touched her agony, drew it out and shaped the defiled flesh. Raising her poison-filled palm to eye level, she gently blew on the putrid pulp until it swelled and bubbled.

She stared at the mass in her palm. ‘They call me daemon now. So be it. They will learn, and I shall teach. As they crushed my temple, so shall they be served.’

With her other hand, she touched the last temple pillar standing complete even in its subterranean neglect and closed her eyes. The shaft’s base quaked deep within Gaia, shaking her earthly folds and sending them slipping over her deep, bleeding heart. Above, Byblos shuddered. Cracks fissured the cave’s root-bound roof, creating conduits to El’s dominion. Grinning, Astarte blew the venom she held into the world of man.
at 1:12 PM No comments:

The Truth About Hermits

When we first moved to our acreage (the old orchard in the local village parlance) there was another farm next door. The neighbor’s barn was in relatively good shape, but not the house. It was very small and dilapidated-looking. Local villagers old us Herman the Hermit lived there. I’d laugh. John the anarchist and the commander of the Michigan Militia lived on our back border, the old dump was to our north and Herman the Hermit lived to our south. I told myself you just never knew where you’d end up.

For a decade I gave Herman (yes, his actual name) his space. If he didn’t want to socialize, I didn’t want to impinge on his right to solitude. Occasionally I’d see him picking up his mail from his post box across the street from his house on the old zoo side of the street. Sometimes I’d see him working when I’d walk the road for exercise. I’d smile and wave. Herman always gave me a worried glance, his lined face squinting in concern, and then he’d quickly turn his shaggy head away from direct contact and briskly walk back across the street to his house. I heard from others in town about his body odor and how bad he smelled. One November I saw him at the polling place, and he grinned at me in recognition. Empty seats were on either side of him. I was surprised at his recognition and sat next to him while we waited our turn to vote. Neither of us said anything. Last winter I saw him walking home through deep snow carrying groceries bags. On the off chance that he needed a lift or would even accept one, I turned my car around and offered him a ride home. He accepted. We never spoke, but he nodded when he got out of my car. I assumed the snow prevented him from getting his old truck from the even older garage, so he had walked the mile to the village.

This summer all everyone believed about Herman changed. Bill and I knew Herman had a sister who owned the acreage backing onto Herman’s, their properties the remaining eighty acres from the original farm, but she lived in Grand Rapids, more than an hour away. On his way into the village, Bill saw Herman and his sister and stopped to say hello, as he’d met the sister before but seldom saw her. She was angry with Herman and asked Bill to help. Herman had had his phone turned off and that was her only way to contact him, and he wouldn’t explain why. What Herman was unwilling to discuss with his older sister, he was very willing to tell Bill who had approached him more times than I had. The plain fact was that Herman didn’t have enough money to pay for the phone.

It seems Herman had never had a regular paying job but helped his mother with what I’ve been told was a dairy farm. At her death twenty years ago, the house and land went to Herman. Since then Herman’s monthly income had been a Social Security payment of $177. After selling off much of the farmland during the 90s to cover his living expenses, Herman was now living in abject poverty and had been for many years. His house had no TV, no radio, no computer, a small counter-top refrigerator to hold the Meals On Wheels frozen dinners he picked up once a week at the local retirement center, and no running water. No wonder he could no longer afford to pay the phone bill.

Bill took Herman into the Social Security office thirty miles away. The woman who took the case was very helpful and very distressed that Herman had ‘fallen through the cracks.’ It was very evident that Herman, while not stupid, lacked social skills and had trouble figuring out technical or financial things. Soon he had a bridge card and ISS that now allows him to buy food and pay his electric bill. A family moving out of state gave him their refrigerator. Several donations from local churches, a big-box store, and individuals allowed some volunteers to reroof Herman’s very leaky roof with steel.

One person said she had passed Herman’s house every night for years going home from work and for the first time she could remember, his lights were on when she passed. Another person said on seeing Herman in town that Herman wasn’t staring at the ground as usual but actually looked him in the face and smiled.
at 6:59 PM No comments: