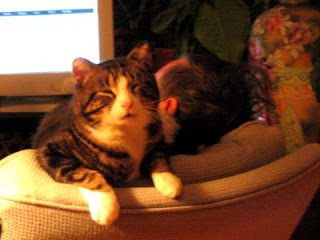 Well, a year later and Jack is still with us. It was a near thing. He spent last winter in isolation downstairs with daily visits. He spent the summer outdoors. After three other cats were attacked, he was nearly shot. The only reason he is alive is the marksman missed the shot and Jack skedaddled. This fall we began bringing him inside again. The other cats have slowly accepted him although there occasionally is some spitting and yowling. He has made himself to home and is very vocal in his opinions.

Update: in August of 2012 Jack went out one afternoon and like four other cats within a two month period, didn't return. Either a coyote or an illegal trapper took our cats. While Jack never became tame enough to approach when he was outside, we could pet him when we put out food. He always ate on top of my desk and would jump up there to demand dinner.
at 7:34 PM