Investment of the Heart 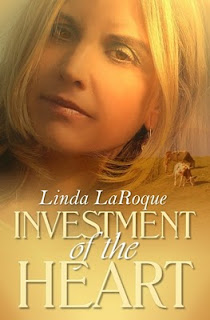 I won my choice of one of Linda LaRoque's novels. I must admit I chose Investment of the Heart because of the beautiful woman who is part of the golden warmth the cover exudes. Linda's other covers are just as beguiling.

Investment of the Heart, from Champagne Books, is set on a ranch in Texas and is about family, relationships, and choices as much as romance.

Hallie Barron first meets Simon Cole in a restaurant while waiting to meet the uncle of her daughter's fiance. Simon is the uncle. He has leaped to the judgment that Hallie's daughter, Elise, like her mother, is just a city girl who can't and won't cope with life as a rancher's wife. This marriage is as doomed as the disastrous one his brother made. When his brother died, Simon stepped in to help raise Justin and his much younger sister, Whitney.  Simon won't let a bad marriage happen to Justin, whose ranch is still in financial stress due to his mother's greed. He tells Hallie, "I might as well get right to the point. This is nothing personal, but I don’t want my nephew to marry your daughter.”  Oh dear! What mother is going to let a man with outright wrong opinions ruin her daughter's happiness? The lines are drawn. When Justin, with Simon's okay, invites Hallie and Elise to the ranch for a two-week visit, Simon plans a special welcome.

Events and engagements are not as straight forward in this contemporary romance as you might expect. Hallie, a competent businesswoman in her own right, and a widow who misses the happiness she found in marriage to an exemplary man is full of other surprises. (The cover captures her essence perfectly.) Simon, of course, once he gets off his high horse and eats some humble pie, turns out to be a great guy who values his family's happiness over his own. Justin and Elise have a lot to learn about themselves and true romance, plus an evil woman causes much havoc. You'll have a hard time guessing which character rides to the rescue. This read is filled with interesting characters with depth, some moments of humor, some of the tear-jerking sadness, distress, and drama, plus a satisfying is-it-going-to-happen romance. So please pick up a copy. You won't be disappointed.