It's Alive! Soil and SciFi

Whenever I work the soil (Master Gardener lesson one: gardens are made of soil, not dirt), I think about the science fiction series Dune which ends with the entire universe of the story existing within the soil of a rose garden.

In some ways this is an accurate image of soil— a different universe full of life. Soil is a living thing containing the minerals of the universe (Another scientific but scifi like connection: Carl Sagan wrote: "We are made of star-stuff"), water, air, the detritus of life (humus), and microbial life. And like any living thing, soil can be killed by poison, starvation, suffocation, or drowning. Soil is the skin of the living planet Earth, and like our skin, other life lives on it.
As a gardener, the first thing I learned was respect for the soil, and rightly so, as a great deal of the world’s life is supported by what lives in soil. Only plants can produce their own food, all the rest of us eat either plants or other animals to survive. I expect our society might be more peaceful if human bodies could manufacture their own food. Oops! Off-topic. (Besides, on reflection, I realize plants are often at war with each other—doesn't this sound like a scifi tile? War of the Plants.)

How much life is underground? It depends on the soil, its temperature, moisture, air content, mineral makeup, and condition. Within my soil I can see macro life such as worms and insects, even mammals, like moles living in the depths, but by far the the largest category of life is invisible to the naked eye— microflora like bacteria, mold, fungi, and algae, and the microfauna like protozoa and nematodes. If you’re lucky, your soil is full of life, or like me, you continually feed your soil with compost and mulch to make it healthy. 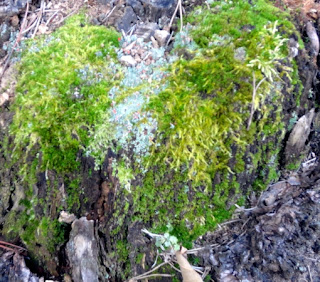 Here’s a fun fact to put this unseen life in perspective. Jeffrey Gordon, a professor at the Washington University in St. Louis School of Medicine has stated that up to ninety percent of the cells in our bodies are non-human cells, from microflora and fauna similar to those found in the soil. So imagine a being as big as the world’s soil mass and what percent is microbial life. What’s more, our lives need those non-human cells living in and on us just as much as the soil in your garden does.

So there it is,  Frank Herbert, Dune's author, was right— there are millions of alien species living on the trillions of mineral planet particles within our soil's universe. Bet the next time you work the soil, you might hesitate to wonder just what you're sinking your hands into.

Update: National Geographic has the scope on dirt -- #5 Soil is Alive -- also some scary information on how humans abuse soil at great risk to themselves.
at 1:55 PM