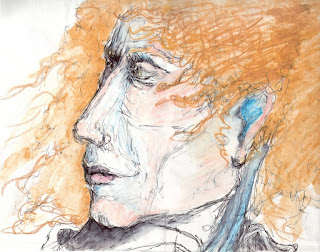 No matter how many stories I read or write, a few characters never leave my soul. Matter of fact, they sometimes seem to haunt me. I first read Elizabeth Bennet's (yes, another Pride and Prejudice fan) in tenth grade, but I've revisited her often, like twenty-plus re-readings and I never miss a movie. The new books carrying her story, or her sisters' stories, forward and other plot and setting machinations, do not interest me as much. Other readers, I know, don't care about her so much, but I'm certain they have one character who they always remember or one who plays a part in their imagination, dreams, or subconscious; for many it might be Harry Potter stars in this role.

Many other characters haunt my subconscious, popping out at the strangest moments, but usually when I'm taking a long walk. It's not only good characters, either, for I often find coercive, mean and twisted characters, who

se behavior I found reprehensible in a story, pop into my mind. Other times a character from an otherwise unremarkable story is so strong they break ground and plant themselves in my imagination.

What is this? Some sort of psychological archetype trick of the mind? If that is the case, I'm sure everyone has different characters hopping around in their cerebral cortex but isn't it rather interesting who shows up?

The trick, of course, for writers is to make sure those characters don't show up in one of their own books. Which is another interesting phenomenon, because often my book characters show up in my brain long before they do a book.

How about other readers? Do you have similar occurrences?
at 8:27 AM