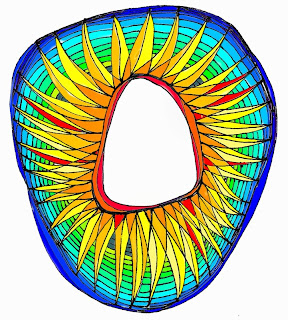 Words of Zero
Counting wouldn't get far without this empty placeholder, so here's to zero.

Symbols:
Color: Color comes from the refection of white light. The absence of light is total blackness, representing nothingness. Black indicates no light. White in paint is the absence of pigment or color although there are mineral pigments used to create the white; thus, white also represents nothingness.

Zero’s prophetic references:
Negative connotations:
Everyone who has ever been called a zero, meaning a nothing, knows the bad side of zero. However, it can also be anyone who deceives himself (herself), remaining oblivious to his (her) own life or the lives of others.

Tarot Divination: The Fool's card upright represents a dreamer or a mystic who wants to accomplish great goals, someone who must be careful to make the right choices. It can also represent any start, but particularly of a journey. To be successful the Fool must plan, make good choices, and be prepared for the unexpected. It also means one chooses the path he takes, either good or evil. Perhaps thinking about a life's philosophy would be a good start. When the card is reversed in the divination layout it can mean a poor choice has been made, that the querier has been foolish or thoughtless.

Common usage, slang, metaphors, phrases:
* * *
Sources Some information is drawn from:
The Discoverers by Daniel J. Boorstin
The Numerology Workbook by Julia Line
Zero to Lazy Eight, the Romance of Numbers by Humez, Humez, and Maguire
Dartmouth, Number Symbolism in the Middle Ages site offers much info on Christianity and numbers.
at 7:45 AM