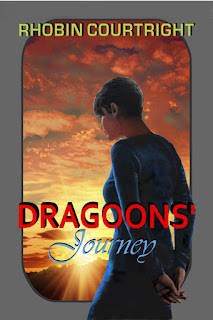 Update: I got the dates wrong! Information now correct:
Wings Publishing will release Dragoon's Journey for June pre-order for $2.99, with publishing scheduled for July. This story ends the story started in Home World ~ Aginfeld and continued in The Nanite Warrior.

Fugitives do not readily enter any heavily policed community, especially ones with populations rabidly paranoid of strangers. Somewhere like the planet Aginfeld. Even if the planet currently held a magnetic draw to galactic tourists, the residents’ mistrust ran deep.

Dragoons, super-soldiers, won the battles but lost the war. Betrayed by their government and held in cryogenic storage for use in future wars, they seek their best-worst chance for finding a home -- Aginfeld, a planet in the last stages of bioformation. The Colonial Pact, a corporation even established governments' fear, wants it. To claim their home the Dragoons must tame the most dangerous, traitorous habitat on Aginfeld.