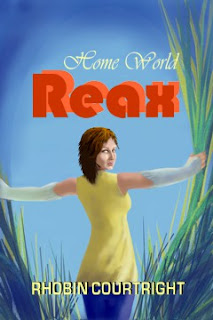 Wings is publishing my book Home World Reax this June.

I enjoy placing characters in new worlds of the future. In this story, Reax is a world whose initial colonists wanted to improve the human genome through selective breeding alone. Soon specific genomes chose names based on their lore from their initial home, Earth. These 'houses' chose the names of animals based on their history of Earth and what characteristics those animals showed. Maera is from Falcon House, the home of keen investigators and peace constables. The very fact Reax has a house specializing in police work tells you much about Reax's success in breeding better people, but in any world times and goals always change

Maera is a young woman abused by her caretaker throughout her childhood. She is smart enough to plan her escape.

Here is an excerpt from Maera's escape on the way home from "Engagement," an initiation Reaxan elites use, sending 'tyros' to foreign places for a year to earn their place in their house. Maera is making sure her best and only friend makes it home from Engagement, too.

~*~
Nothing seemed worse to Maera, as a halfbreed, than returning to Reax, not when freedom came within her grasp. No one from the Falcon or Swan Houses expected either of them to return, nor did the Genome Council’s Engagement Committee. They had purposely sent Sareen to this location, anticipating her failure. Well, not exactly this location, but one more hostile than this place, and me to one far more dangerous. Sareen would return, and they would accept her back, look closer at her genome, and perhaps scratch their collective heads. Luckily, she would not return. Her cavalier rearrangement of assignments would never come to the council’s knowledge. Her situation of being ‘unseen’ and marginalized ended. Now she began a life dedicated to achieving her own goals.

Sareen’s Engagement dislocation they would attribute to a mix-up in assignments, and who but the swaggering Wolf House’s Vulk, one of the councilor’s sons originally assigned an easy location on Ubret should serve Sareen’s much harsher assignment? The young man most likely had survived his Engagement, so his merit would certainly increase. Maera grinned at the thought. That young man had bragged about his easy placement location. It made a lie of the committee’s claims of fair assignments based on assessments.

Which made her own return too dangerous an act of defiance. She wondered if her house had specifically asked for a terminating assignment. Did hateful Uslina have influence there? Had the Genome Council cleansed the houses of unwanted genomes throughout the ages through this ploy? She believed it. House tyros who refused placement went to the gen’rals, condemning their children to life outside any house.

It no longer mattered. She could not afford to go back, not after all her illegal snooping and modification in protected databanks, nor did she want to return. She wanted escape. Freedom. Her homecoming would have sparked an investigation, and even one tiny thread unraveling could entangle her in a mass of trouble. Her failure to return would please many. They would call it proof she did not deserve house recognition.

If Falcon House had unintentionally taught her anything, it taught her survival. And self-reliance, she amended. Truth to tell, her house accepted neither her genome half nor her wild, unknown half. From her aunt’s harshness, she had learned how to avoid and escape bad situations, how to help herself, how to prevent others from discovering she helped herself, and most important, how to keep secrets… and how to discern them.

Learning the Genome Council orchestrated who passed Engagement only confirmed her suspicions. It did not matter anyway. She did not care about the members’ secrets, except how they might have affected her and Sareen. That she achieved—safe return for her friend, self-determination for herself.

She heard Sareen approach and stop next to her. Maera turned her face toward the far off horizon, giving Sareen time to recover from the last segment of their walk. Finally, she lowered her gaze to Sareen. Her friend’s gaze looked downward, encompassing the port, her tired satisfaction in her
achievement apparent. Maera could not hide the self-satisfied smile she felt cover her face.

“I’m not joking, Sare. I’m not going back. That life is for you and the other genome pures.”

“You should not use that gen’rals slur, especially as we go home,” Sareen said in a very soft, non-confrontational voice of warning. “You don’t know who you could offend.”

Maera shrugged. A few unmentionable gen’rals had helped her survive. She started brushing the dust off her pant legs. Thoughts of past hurts and future dreams wrapped in a tumbling jumble of anticipation she could taste. “Anyhow, even if I did return, they’d probably only find cause to send me to the gen’rals. You know they would. I wouldn’t even mind that, not the supposed shame, or nothing else.” She looked at Sareen, “Except I have other plans.” Her voice throbbed with an excitement hard to hide.

Sareen’s distressed gaze made contact everywhere except Maera’s eyes, showing her evasive agreement with the prognosis. Maera raised a hand over her eyes to look at the view below them. The port spread in a vast meadow of architecture, machinery, and paved confusion, the only place on Ubret where technology reigned. People going places and doing things filled the area.

Maera wanted to run, jump, and leap her way there. She side-glanced at Sareen, read the stubborn look, and then looked at the spaceport again. “It’s just, Sare. Really it is. I want this. You want to go
back. That’s just, too.”

Sareen’s words, barely above a whisper, interrupted Maera’s speeding anticipation. She spoke without thought. “No miracle, Sare.” Then she realized her admission. Sareen still believed their meeting a sheer accident.


~*~
Nine years after Maera's escape, Reax has suffered a civil war and a devastating plague that has decimated the population. The colony is in a dire situation, and Raven Jencet, formerly of Eagle house and now of Raven House, is sent out to bring this successful soldier and financier home, but he considers her a renegade traitor.