Snow: The Biography by Giles Whittel 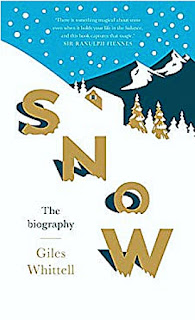 Did you know dust is an essential element of a snowflake? Do you know how many snowflakes it takes to make a snowman? Or how many snowmen can be made from Earth’s daily snowfall in just ten minutes? Besides information about snowflakes and other types of snow, the book provides mind-boggling knowledge such as the Earth might once have been a snowball, or the largest snowfalls in a single day, or how much snowdrops on the Earth every day. It has even snowed in both northern Africa and South America. It will utterly surprise the reader because the amount of snow far exceeds expectations. Why does it snow? What causes snow to be so slippery? How does the Earth benefit from snow? These topics bring up the entertainment snow has provided humans and its dangers such as avalanches.

Coming from Michigan, I am very familiar with snow, but what author Giles Whittell, a correspondent for England’s The Times, who has traveled the world both for his work and for his obsession with snow, presents often unknown information. Besides explaining snowfall, he tells how snow, which once covered our mountain tops and far northern and southern climes, is now receding, and how its reflective qualities have helped stabilize the Earth’s temperatures. Some unfamiliar scientific terminology might slow reading, but SNOW provides fascinating realities about snow and gives warning that snow may end this century. This could lead not only to economic disaster for some countries but also will increase global warming.

Whittell provides a history of human involvement with the cold, white (actually transparent as all light waves reflect off it making it seem white) substance. As a ski enthusiast, he gives great examples of skiing and mountain climbing extremes and achievements involving dangerous or at least risky snow conditions.

Snow is an engrossing book whether you live in a snowy area or not.
It comes out on November 19.