How We Use Symbolism

Humans have used symbolism since they first began communicating and probably for longer than the carved and painted symbols images anthropologists have identified in ancient caves guessed at 90,000 years old. These prove some type of communication took place. Matter of fact, British researchers have found 23 words that have remained basically the same for 15,000 years, words still common in English and many other of today's languages. Image symbols go back even further, probably because they were preserved in caves. Sounds are symbols as much as images, so language itself is communicated through symbols. Gestures fall into symbolic messages, too. A simple hand movement can mean greeting or go away, join me, or stop, or be quiet. We all can read body language although it is easier to misinterpret.

Just as the same word can deliver different meanings, symbols also can represent different ideas in different cultures. Words can shift meaning, usually within the context of the sentence where they are used, but sometimes just over time. Images of certain plants and animals convey other ideas, as do colors, sounds, and certain objects. While symbols are an everyday form of communication, they can also give meaning to invisible beliefs, spirits, ideas, or moods. The history of storytelling has created many mythical but symbolic creatures such as fairies, dragons, griffins, leprechauns, mermaids, Pegasus, sphinxes, Thunderbirds, unicorns, and werewolves. I've used these in one of my fantasy stories and a book cover.

I would think it almost impossible not to use symbolism whether thinking about it or not. Every color has a symbolic meaning, black and white especially, but brown is often considered mundane, a neutral mixture of all colors, yet since earth (dirt) is usually brown, it also conveys a foundation for life. I used the color to define one character as a bland-looking man, but one with a deep moral ethic. I’ve used red to indicate evil, as shown in this paragraph:

Dressed in formal regalia, the king and court assembled in the Ruby Throne Room, named for the cerise and sanguine marble covering the floors and walls. Ancient granite columns held ornate gilded capitals supporting a mural-clad ceiling. Gold glinted everywhere in the sunlight flooding throughout the vast clerestory windows. It accentuated the floors, revealing the veining in the stone
that looked like roses twining through the blood. When Eldin first met the nit-wit Uilleam, the young man had a sing-song about the floor. ‘The court convenes in sanguine, makes peace in cerise, the king’s great floral without one moral.’ 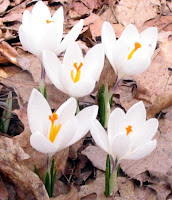 I’ve also used the flowers of crocus in a story to indicate spring’s arrival but also the hope of a brighter future, so while I cannot remember every usage of symbolism in my stories, I’m sure they are there as even certain scenes evoke symbolism. Even the cover for Magic Aegis used symbols.  This layering of meaning can be powerful, sometimes more than a simple description. The quick interpretation by the reader, whether recognized or not, also draws them further into a story.
at 6:13 AM