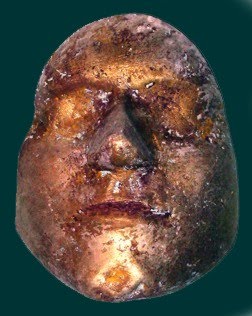 Years ago for something to entertain kids, I wrapped the faces of my family in plaster bandaging and made masks. (Once started all the adults wanted to participate, too.) It was a fun project. Everyone slathered their face with Vaseline, put on a shower cap and slowly had their face cast. It took about ten minutes and the roughcast bore a somewhat blunted but fairly accurate replica of each face. I painted many to look like masks.

It was a great project for kids because while your face was covered so completely--except for nostrils, which obviously had to remain uncovered--it was a bit scary. I did this project with three sixth grade classes in Colorado Springs the one year we lived there, and the students seemed to love it. They worked in teams of three, one subject, one wrapper, and one support person who talked and held the hand of the subject. 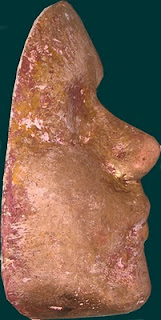 Eventually, over the years the bandaging disintegrated. I had experimented with casting one, but whatever I did failed and I lost that mask. I had three left, and they were crumbling, so I threw them out. They landed back on my desk after someone saved them from the trash.

Since they wouldn't go away, I decided I'd better do something with them. First I painted the interior of each one with Elmer's glue, hoping that would stop the crumbling. It did. So I slathered the inside of each mask with Vaseline and filled each one with a wood patch, which is basically plaster of Paris, but it was what I had on hand. The faces easily popped out of the molds. After some sanding, I decided they had to be painted. The question was, realistically or not? Just a coat of any color of paint wasn't very interesting, so I painted each to look like rock with a slight metallic sheen.

Holes drilled in the back allow them to be hung on the wall, but I might put them on dowels so they stand up. Perhaps I'll have a whole row of them across the fireplace mantle. They look a little bizarre because the subject's eyes were closed when the bandaging was applied, so everyone looks like they are sleeping... Hopefully, no one will think they are death masks, but even if they do, I find them interesting. The two lower-profile faces are my children at ages eleven and eight. I'm really pleased to have these keepsakes. There are better methods of casting faces using latex molding material and casting the mold in resin, but the plaster bandaging is much cheaper and much less labor-intensive.

I will be going to Kansas on a family visit in early summer, and it has already been suggested that we make masks of the new generation. Won't that be fun? If your family is suffering from cabin fever or winter blues, this might be a project that will take their mind off the weather. All you need is Vaseline, cheap, throw-away shower caps and plaster bandaging that most medical supply stores stock if none is available in your area, do an online search. There are many sources. Each face should cost about $7 to $12, maybe less, depending on sources and on whether you recast the masks for sculptures.
at 11:49 AM

Email ThisBlogThis!Share to TwitterShare to FacebookShare to Pinterest
Labels: crafts, masks, my world