We had an ice storm yesterday, with snow today. Snow over ice, how great is that? Anyway, I'm staying indoors looking at seed catalogs, which always makes me think about what miracles those paper packages hold.

Plants existed millions of years before seed reproduction developed, and many of these ancient plants still exist. For instance, ferns produce spores, but spores can't survive harsh, dry climates. From this ancient background, almost every plant possesses more than one method of reproduction, and when it comes to cloning, they are masters. Most plants can spread through their root systems. They start as a single stem that grows into a clump. Once thriving, the clump expands into a thicket or grove. So why develop seeds?

Seed production involves sharing genes, which we now know expands the chances of survival by allowing plants to adapt in an entirely new way. Seed production is the only reproduction method that produces an entirely new plant. They may grow to look exactly the same to you and me, but I expect if they could see us, they'd say the same thing. We learn in basic biology class that pollen from the male plant lands on the stigma of the female plant. Soon afterward the male and female cells combine, sharing their genes. These genes create an embryo-like the parent plant, but different in some small way that might improve its survival. This embryo's chances are initially enhanced by encasing the tiny life in a spaceship filled with food and surrounded by a hard shell. When conditions outside are good, the shell softens, absorbs water and allows the embryo to develop. 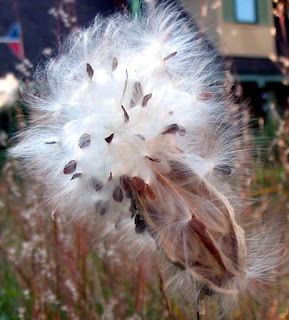 How long can the embryo survive inside a seed? Viability changes from species to species. Most last at least one year. Vegetable seeds usually remain viable three to five years. However, there was a date palm seed found in Masada, Israel at Herod's palace. Carbon dating aged the seed at two thousand years old. To prove viable, the seed's embryo had to develop into a plant. A carbon-dated 1,300-year-old lotus seed has also proved viable.

Isn't it amazing that so many of the sciences man tries to invent like cloning, and longevity, plants have already accomplished? Besides their self-serving purposes, plant seeds provide human food. Wheat, oats, corn, rice, peas, cherries, and strawberries are all seeds. They also serve writers, providing great metaphors and similes. Another huge plus for humans from plants producing seeds--to make seeds, they must first make flowers. How wondrous is that?