Have you ever wondered when writing started, when man first began making marks on surfaces? If making marks was the beginning, then surely writing even in the guise of art is man's oldest, most valuable technology. More importantly, writing led to all of our other technologies. 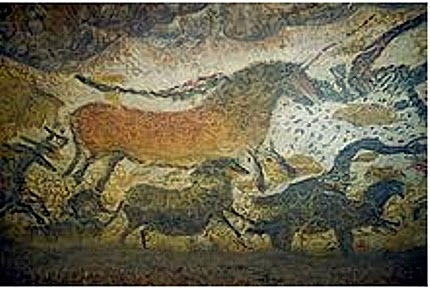 About twenty thousand years ago, Paleolithic people began descending into an extensive complex of caverns in Southern France to carve and paint on the cave's walls depictions of animals, people, and symbols. What drove these men, and hopefully women, into what I imagine would be a very dark and scary place? How long had they practiced this ritual? As a former art teacher, I can tell you these are not ill-thought-out childish works, but wonderful and imaginative art. 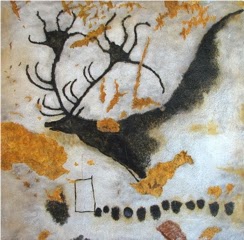 A teenage boy found the caves in 1940. Opened after World War II, visitors flocked to see the caves, but France closed access only eighteen years later in 1963. For more information on the discovery of the caves and the attempt to preserve them click on  Finding Lascaux.

Have you ever visited a cave with Paleolithic paintings and symbols painted on the walls? In most instances, you cannot anymore. The caves are closed to the public, closed to most scientists and researchers too. You have to have special permission to visit. Otherwise, we would destroy these relics of our past, certainly by those trying to cart off a piece for their own, or by someone destroying a piece for the pleasure received, or by the fact visitors keep breathing. In the years the caves were open, the keepers found the carbon dioxide in our breath damaged the paintings, not to mention all the damage done by bacteria and fungus humans tracked in did.

Now, however, you can take a virtual tour. Go to Lascaux Caves and click on the 'visite de la grotto' (or upper in right corner choose EN for English) for a tour, click on the image when it comes up. It is utterly amazing. Does it make you wonder why? What drove these people? These are not small paintings as some are over thirty feet in length. These mark makers ignited or expressed something inherent in humans: the desire to leave information for others, evidence they lived and thought. Those privileged the art of leaving marks have been doing so ever since.

Reprinted from my 1/21/2014 post on Writer's Vineyard. Images from Wikipedia Commons and public domain.
at 4:29 PM