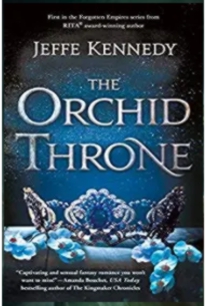 The 16th Year of the Reign of Emperor Anure
Before his death, the king of Calanthe, in order to save his island kingdom from the devastating destruction by the self-proclaimed Emperor Anure, offered his ten-year-old daughter Euthalia in marriage when she became of age. Anure agreed, believing no magic existed on Calanthe. Anure assumed power over the rest of the world by destroying the kingdoms and their ancient land magic. Now sixteen years later Queen Euthalia plays a deadly game. Always watched by her courtiers and the enemies within her court, she is bound by the daily rituals and plays a political dance with the emperor to delay their marriage. His having four other wives helps.

Queen Euthalia wears the Orchid Ring which signals her rule of the kingdom of Calanthe, known as the island of flowers. Something few know is that the Orchid Ring is magical. It passes knowledge of happenings on the land and in the waters of Calanthe to Euthalia. This magic is strong, but Euthalia knows keeping her power means she must prevent any bloodshed on the land. No one can suspect she uses the ancient magic the emperor tried to wipe out. Recent nightmares of a chained wolf plague her dreams leaving her in dread of a new danger.

Upon conquering and destroying the kingdom of Oriel with his new weapon Vurgsten, a flammable rock, the emperor had sent ten-year-old Prince Conri, his sister, and his father the former king, as slaves to the volcanic mines of the island Vurgmun. Within the mines Conri’s father and sister died horrible deaths. While abusing the mine’s slaves, the guards overlooked what a powerful warrior their cruelty created.
Con knows he, as the former prince Conri, no longer exists. He seized the mines with his army of former slaves. He is now Con, the King of Slaves. His hatred for the emperor provides his sole purpose—to kill the false emperor. Like all the slaves in the Vurgmun mine, the fiery and dangerous weaponized mineral Vurgsten has damaged Con’s skin and lungs. Former Lady Sondra and the wizard Ambrose escaped captivity with him, and now help with his army. Ambrose tells Con a prophesy about the abiding ring. Con must marry its holder.

THE ORCHID THRONE is told in alternating first-person narratives between Euthalia and Conri. When Euthalia receives warning the King of Slaves is coming to Calanthe, she prepares a special greeting to capture the emperor’s enemies, save Calanthe, and keep the emperor from claiming her. While both Calanthe’s queen and the slave king are cautious, an unrelenting attraction develops between them. Themes about rituals, magic, wizards, and rebellion fill the story making it a captivating read that grows more engrossing with each chapter.
at 4:20 PM