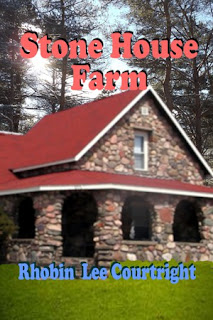 This is a sort-of contemporary romance novel as it is set in 2009, when I originally wrote it. It is set in Manistee, Michigan, near the shores of Lake Michigan.

Here is an excerpt from the story's beginning:

Amanda pushed through the glass front door expecting to have to plow past secretaries and assorted office henchmen, but as luck would have it, Wade Preston stood in the reception area talking with his partner, Edward Van Haitsma. Wade’s height and dark hair made a strong contrast to his partner’s shorter frame and fair hair. Both were good looking by anyone’s standard. Wade held a stack of papers. The two men looked as if they had just finished a heated discussion.
“Whatever you want!” Van Haitsma said as he turned and walked away, his shoes pounding an upset rhythm on the refinished, highly polished oak flooring.
Preston’s fiancée, Melissa Rillema, stood nearby with her arms crossed. A pout marred the perfection of her face. Since only the woman’s mouth moved, without a hint of frown lines, Amanda snorted, suspecting cosmetic injections. Melissa would make a perfect wife for Wade. Two beautiful, congenial rich rats running in a social superiority maze. Melissa’s long blonde hair rippled about her shoulders as she turned her head to glance at Amanda, then back to Wade who had walked over to her.
As she strode forward to interrupt the couple’s private interlude, Wade looked over at her, anger etching his face. She checked her step before charging ahead. Hell, he had to expect a storm after the letter he sent her. As Wade watched her approach, his face firmed into what Amanda privately called the bulldog behind the businessman’s mask. It infuriated her to have to spend her precious lunchtime taking care of this matter. This time, she would talk to Wade Preston face-to-face and make her position clear.
“Mrs. Carter, how can I help you?”
He recognized her? His voice and demeanor were politely bland, but remnants of anger lingered in lines around his handsome features. He called her by her married name, something she had discarded after her divorce.
She held Preston’s gaze with determination. As a freshman teenager in high school with hormones and the idealism of innocence, Amanda’s dream world starred the senior quarterback, Wade Preston. Back then, he had been oblivious of her.
“It’s Ms. Blanchard, now. You can help me, Mr. Preston, by accepting the fact that I do not want to sell my property. Not now, and not in the future. Furthermore, I will not let you steal it from me.” Heads turned toward the sound of her angry tones. Most looked like employees and quickly looked away when Amanda stared back at them. Wade’s face deepened in color, his mouth and jaw set, his eyes darkening.
She waved the envelope under his nose. He took it, looked at the address, and pulled the sheets from inside. His brows scrunched lower as he read.
“You’ve received an offer at a fair-market price,” Wade said, his voice firm, low and controlled. Her temper eased slightly seeing the wrinkle between his brows as he looked at her letter.
Melissa smiled pityingly at Amanda. “I would think in your dire circumstances, Wade’s offer was manna from Heaven.” Her tone one of pure condescension.
“Stay out of this,” Wade said with a fierce gaze at his fiancée. Amanda thought Melissa’s smile more smirk than compliance and doubted the woman had even heard her lover.
“What could you possibly know about my situation?” Amanda said. “And how does any of this involve you?”
The smile never faltered. “I understand it is a very generous offer.”
Amanda’s rage fired anew. Melissa had no part in this, and her opinion was not only unneeded but also unwanted. “Generous if I were willing to sell out what my family has worked generations to build. I’m not.” Amanda turned back to Wade Preston, grabbed the letter from his hand, and clutched it in her fist.
His frowning gaze turned to Amanda, his brows lowering until they nearly touched. “I don’t know what you are alleging. As I said, this is an offer at a fair market price for your property.”
“You missed the threat of an eminent domain seizure. I don’t care what dirty tricks you try with the bank, or the county Planning Department, or the Commissioners, or the township board. I will fight you every step of the way.”
“Then you better hire a lawyer,” Melissa cut in with a practiced tinkling sound that substituted for a laugh.
“Melissa…” Wade’s tone held a warning and his scowl deepened.
Amanda kept her regard on Wade, hoping her expression said I am not backing down. If not pumped with so much adrenaline, she would never have felt so defiant, but Melissa’s confidence ate at her self-assurance. Her diffident side advised retreat. Having said what she wanted, she turned on her heel and swept out of the office, escaping any further humiliation.