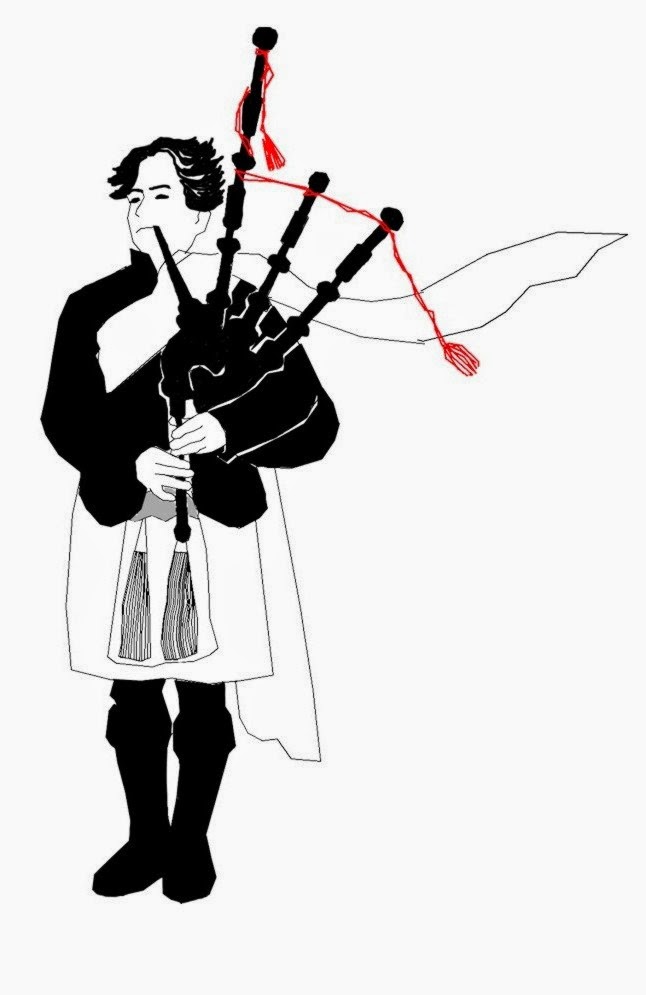 Coming from Scottish and Irish ancestry, I’ve always loved the sound of bagpipes, especially at parades; and nothing is more poignant for me than the notes of 'Amazing Grace' coming from a bagpipe. Both the ancestry (Home World ~ Aginfeld) and the pipes have played parts in my novels.

That aside, have you noticed how bagpipes have become part of the military not only Scotland, Britain, and former British territories like Canada but also with U.S. military, police and fire departments? Matter of fact, many of these have registered tartans with the Scottish Registry, including the U.S. Air Force, Coast Guard, Navy, Army Civilian Affairs, Seabees, although no piper bands are now active military. In my home state, the Michigan State Police registered a plaid, although I don't think they have a band, they perhaps have a piper, and the Detroit Metro Police have a plaid for their pipers.

Bagpipes are essentially windpipes with an inflatable bag to maintain the sound. Various carvings and illustrations show they have been used for centuries in various forms from around Europe, the Middle East, and Northern Africa. Their origins remain in the murky past with much speculation: perhaps the Roman armies spread them around their empire, maybe they were invented in Assyria, but there is no definitive proof. Their history becomes better recorded from the seventeenth century on. While Scottish bagpipes are ubiquitous for the instrument, there are other forms such as the uilleann pipes of Ireland and the Spanish Gaita. Wikipedia has a list.

Supposedly, the Scottish used the dire sound of the pipes to frighten opposing armies, and records show British pipers played during battles right up and into World War I. However, with the change in weaponry, the pipers became easy targets. Records show they were still used upon occasion in other modern conflicts. Besides creating unity among soldiers in past centuries, if soldiers were marching, pipes would certainly warn anyone on horseback or driving wagons in their path to get off the road and out of the way. They may have served to frighten equines in war, too, forcing anyone mounted to either dismount or concentrate on controlling their horse.

According to Richard Scott Blair, Ph.D. in his “A Brief History Of Military Piping Abroad And In America,” (link site is gone) kilted troopers following bagpipes have been in the U.S. since the Revolutionary War. He gives a excellent account of U.S. military bagpipe history. It seems all of the active-duty bagpipe bands are defunct, but retired military pipers and bands keep the tradition alive.

Despite their military history, I would guess that popularity grew because people liked the sound and the entertainment, and nothing makes a more mournful sound for a memorial or funeral service. Immigrants bring their traditions with them, and that is true of the Irish and Scottish. Especially in the nineteenth century during the famines, they brought their pipes with them and used them for their celebrations and funerals. Because of discrimination, often the only jobs available for these immigrants in port cities like New York and Boston were as firefighters or policemen, both considered dangerous, often dirty work, so when the Scots or Irish lost a member to fighting fire or to a criminal, bagpipes played at the funeral, an association that become entwined with burying heroes.

Today, many of our soldiers leave the military and begin work with many fire and police departments around the country. Which is why yesterday, Memorial Day, so many pipers were present.
at 1:38 PM